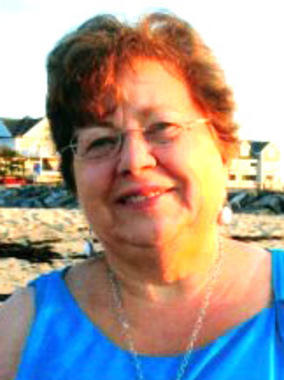 Back to Shirley's story

Shirley Manning, 73, Versailles, passed away peacefully with her family at her side on Tuesday, December 10, 2019.
Shirley, a small but mighty lady, fought a brave, courageous six-year battle with Neuroendocrine cancer of the lung. In April of this year, she was given only a couple of months to live, but her family said she was one of the bravest fighters they had ever seen.
She was born at Dunville in Newfoundland, Canada, the daughter of William and Hazel Abbott Elliott.
She is survived by her daughter, Fern (John) Baumer of Batesville; one son, Brad (Becky) Walker of Louisville; grandchildren Jake, Olivia, and Katie Baumer of Batesville, and Molly and Owen Walker of Louisville; three brothers, Irving Elliott, Bill (Kathleen) Elliott, and Ed (Gloria) Elliott, all of Newfoundland; three sisters, Alma Elliott of Nova Scotia, Elaine (Frank) Sullivan of Allenstown, New Hampshire, and Christine (Jon) Walton of Ontario.
She was preceded in death by her parents and her husband Donald Manning, who passed away in 2004.
Shirley moved to the United States 50 years ago after marrying a U.S. sailor from Batesville. After being a homemaker for many years, she was an assistant manager at the Batesville Hardee's. She and Don traveled the U.S. in their RV and also traveled back to her homeland Newfoundland, Canada.
She moved back to Versailles to be closer to family and began a part-time job at Butternut Bread in Versailles. She would always love to bring her family hostess treats, especially her son-in-law Hunk. She was an avid card player and belonged to a senior card club and enjoyed the many friends she met while living in the senior housing at Versailles.
Most of all she adored her children and grandchildren and would always try to make it to all of their events. Family was a priority and taking a trip back to Newfoundland for a family reunion was a highlight. She was truly a loyal friend and a woman of integrity. She was also a woman of great faith and was a member of the New Testament Church of Christ in Osgood.
Funeral services will be held at 1 p.m. Saturday, December 14, at the Stratton-Karsteter Funeral Home, Versailles, with Bro. Irvin Hart officiating. Burial will be in the Old Salem Cemetery near Batesville. Visitation will be Friday, Dec. 13, from 4-7 p.m. Memorials may be given to Our Hospice of South Central Indiana or the Old Salem Cemetery in care of the funeral home.
Published on December 10, 2019
To plant a tree in memory of Shirley Manning, please visit Tribute Store.

Plant a tree in memory
of Shirley

A place to share condolences and memories.
The guestbook expires on March 09, 2020.

Keith and Carolann Parsons
We met Shirley the first time a number of years ago when the "sisters" came to NL to surprise their Brother, Ed. So they gathered on my Deck to carry out the "SURPRISE" as we are Ed and Gloria's next door neighbors in CBS, Newfoundland. Well what characters they were laughing and carrying on. Despite her small in stature Shirley was a force to be reckoned with. It is not surprisingly to me her spirit to fight. Remember her in the celebration of life. Ours prayer are with you and may she rest in peace.
Betty "Schulte" Newton
I'll miss you Shirley, even though we weren't close. Sorry for Fern and Brad's loss, she was a wonderful person.
Carla Lisa Mindy

Blue Caribbean was purchased for the family of Shirley Manning by Carla Lisa Mindy.  Send flowers

Alma Elliott
I will forever miss and love you. May the Angels wrap their wings around you and bring you to Heaven to join our Mom and Dad. I will always have precious memories of our time growing up and trips to Newfoundland. A piece of my heart goes with you my dear sister hugs

My Condolences , to All Family Members , Aunt Shirley , Will Be Dearly miss , Tell we meet again ! Love from my Family to yours !

My Condolences , to all Family Members , my Prayers are with you all , Aunt Shirley, will be dearly Miss , tell we meet again , Love from my Family !

Marie Hammond (Abbott), Doreen Horan (Abbott), Geraldine White (Abbott) and Jennifer Trimble (Abbott)
Our condolences to all the family from cousins Marie, Doreen, Geraldine and Jennifer and families. Our thoughts and prayers are with each and everyone of you at this sad time. We have many wonderful memories of Shirley when we were young and she would visit my mom and dad and us kids. She was so energetic and full of fun. She loved a good time, music, dancing and just being around family. She was the life of the party. We haven't seen each other as much as we would have like in the past years, as age and distance keep us apart. But rest assured you will be missed by us all. Fly with the angels dear cousin, god will keep you safe in his arms.
Brenda Roe

Medium Dish Garden was purchased for the family of Shirley Manning by Brenda Roe.  Send flowers

You will be missed so much Aunt Shirley. You are a very special person with a huge heart and always was a great Aunt to my brother Frank Sullivan and I. I know you are in a better place now rejoicing with the Lord and love ones. (Going to miss doing the Newfie Stomp with you!) RIP Shirley. Love you always and forever, John&Peggy Sullivan xoxo

Gail Howe
So heartbroken to here of Aunt Shirley's passing .My thoughts and prayers are with her family. Lots of love from Newfoundland. Rest easy sweet angel!
Margaret Bruce

Basket Full of Wishes was purchased for the family of Shirley Manning by Margaret Bruce.  Send flowers