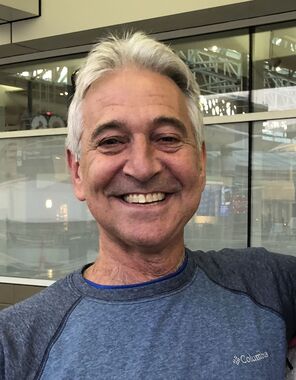 Back to Charles's story

Charles Arthur Lachenbruch (Charlie), the devoted son of Edith Bennett and Arthur Herold Lachenbruch, lived a full life. He grew up in Palo Alto and Los Altos Hills, California, forever scanning the horizon, hiking down trails, and flipping boards to look for animals. He was active as an athlete in high school, college, and beyond, where he moved from early years of tennis, basketball, baseball, and track to college and minor league baseball. He was an exceptional college pitcher with an earned run average of 1.24 and a fastball clocked at 98 mph. Following college, he became an accomplished marathon runner, and when running injuries prevented further marathons he turned to cycling and was quickly a competitive state and national force. He qualified for and competed in the 1988 Olympic cycling trials and was a two-time Masters National Time Trial champion.

He attended UC Santa Cruz and then the Johns Hopkins University where he received a B.S. in environmental engineering, and then earned an M.S. in exercise physiology from North Texas State followed by a Ph.D. at the University of Texas in Biomedical Engineering. During those early years, he also lived, worked, or studied in Alaska, California, and Florida. Inventive and curious, he pursued ideas of how to cool organs and bodies after trauma to help prolong the period an injured person or organ could survive while medical interventions were being administered. He eventually rose to the position of Chief Scientist at Hill-Rom, a global manufacturer of hospital and medical equipment. He worked for them from Charleston, South Carolina, and Austin, Texas, for many years before moving to their national headquarters in Batesville, Indiana. There, he was a gentle supervisor, an exceptional mentor, and an expert communicator who could give tours and explain processes to scientific peers and to staff alike, while running an active research program and overseeing the scientific accuracy of claims his company made of their products. For many years he was the leader of an international group in wound care, specializing in pressure ulcers and in technologies that help prevent them. He has many publications and patents, and the patents are deployed in hospital beds around the world.

Charlie was a friendly person with a ready smile for people around him. He was a dedicated worker but was nourished by physical activity. No one we know had a better arm for throwing--height, distance, speed, even skipping stones on water, and no one had a better eye for wildlife or better recall at statistics about the species he saw. He followed sports teams by the season and had an encyclopedic knowledge of records in track and field, baseball, basketball, and football. His interests in describing the physical world through biological and engineering principles showed through in his hobbies, not just in his work.

Charlie had a healthy concern for his friends, family, and the world. He followed politics, and whereas he did share his opinions, he was an especially good listener. Charlie leaves many friends behind, including his immediate family, Shelly Lachenbruch (wife), Roger and Barbara Lachenbruch (siblings), Art Lachenbruch (father), Nathan and Elena Gartner (nephew and niece), and his former wives and their families, Shannon Lindner, Laura Lowy Mouw, and Chris Tedrow. He had especially important relationships with work friends but also with team members and biking and running partners over the years. With his interest in the natural world, his engagement with improving medical care, and his special interactions with so many people, Charlie had a good life on this Earth. Charlie will be missed by many friends who know they were privileged to have been among those special people that he knew. Remembrances can be sent to a nonprofit, preferably one that helps protect human rights or people in vulnerable conditions, or to the Pancreatic Cancer Action Network.
Published on December 27, 2018
To plant a tree in memory of Charles Arthur Lachenbruch, please visit Tribute Store.

Plant a tree in memory
of Charles

A place to share condolences and memories.
The guestbook expires on March 27, 2019.

Restore this Guestbook to share a memory or message of condolence of your own.